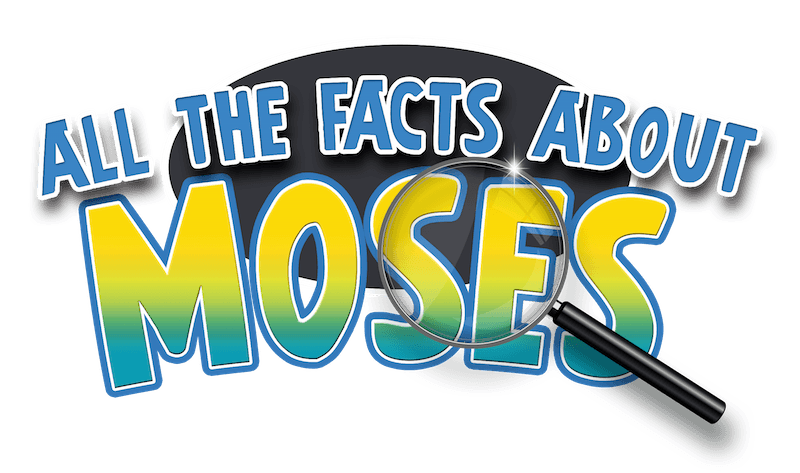 Discover the Essential Facts
Kids Need to Know About Moses!

Teach Kids How a Shy, Humble Man
Became the Only Human Permitted to
Talk  With God ‘Face to Face’!

Kids today need heroes – and not just people who are good at throwing a football or who have a terrific singing voice or who were born into a famous family.

Unfortunately, many churches focus on teaching kids STORIES and the “morals of those stories” instead of letting them get to know the real PEOPLE involved.

For example: Most churches teach kids about Moses in snippets - kids might learn about the Ten Commandments one year and then hear about him parting the Red Sea the next. So kids remember a guy who was involved in some pretty amazing things but they really don’t get to know what he was like as a man.

Moses becomes just another passing character that they know is in the Bible, but that they don’t really come to KNOW.

And there is so much about Moses that is worth knowing and learning from. He committed a grievous sin yet he became extremely close to God. He survived a trip down the Nile as a baby. He appeared at the Transfiguration with Jesus. Consider these verses from the Bible:

“Now the man Moses was very meek, more than all people who were on the face of the earth.” – Numbers 12:3

“But this is not true of my servant Moses; he is faithful in all my house. With him I speak face to face, clearly and not in riddles; he sees the form of the Lord.” – Numbers 12:7-8

“By faith Moses, when he was grown up, refused to be called the son of Pharaoh’s daughter, choosing rather to be mistreated with the people of God than to enjoy the fleeting pleasures of sin.” – Hebrews 11:24-25

Don’t those verses paint a picture of a complex, interesting man that kids would benefit from knowing better – someone who can inspire them to step out of their comfort zone and accomplish more?

INTRODUCING:
All the Facts About Moses
Lesson Pack … 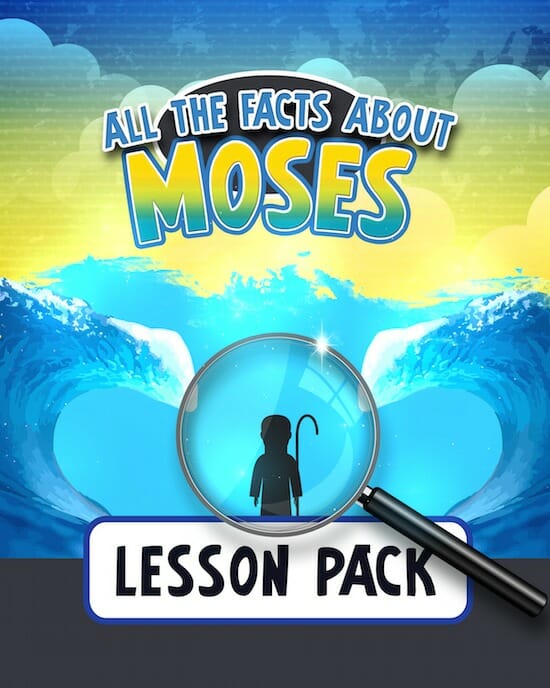 In All the Facts About Moses we lay out the truth about this amazing man.

Instead of learning about Moses as just a character in popular Bible lessons, kids will discover Moses as a PERSON.

They will learn about his fascinating life story, his personality, his mistakes, his triumphs.

We have organized our Lesson Pack into FOUR 1-hour lesson plans.

The 1-hour lessons can be given one after the other as a month long module or used throughout the year as needed- they are designed to be flexible!

A hallmark of our lesson plans is our “Teaching Script”. We provide you the exact words, questions, and discussion topics so your message will always hit home with kids. You can use the scripts word-for-word or just simply as a guide – it's up to you!

In short, you get everything you need to teach kids about Moses with confidence & ease!

Here is Just Some of What Kids Will Learn from This Lesson Pack: 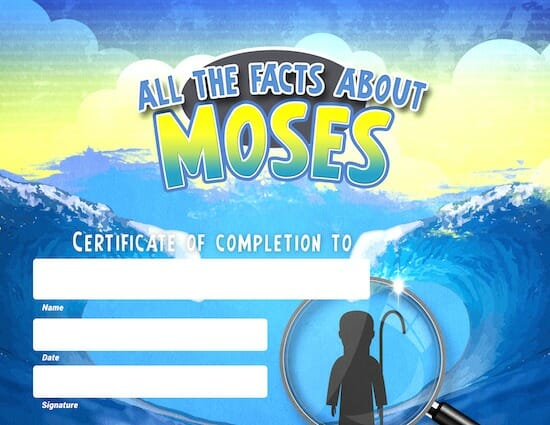 Use our printable 8.5 X 11 certificate to award students upon completion of the Moses Lessons.

Print off as many copies as you need year after year.

Simply fill in the blanks.

Encourage parents to post on the refrigerator to celebrate their child's accomplishment and serve as a discussion starter. 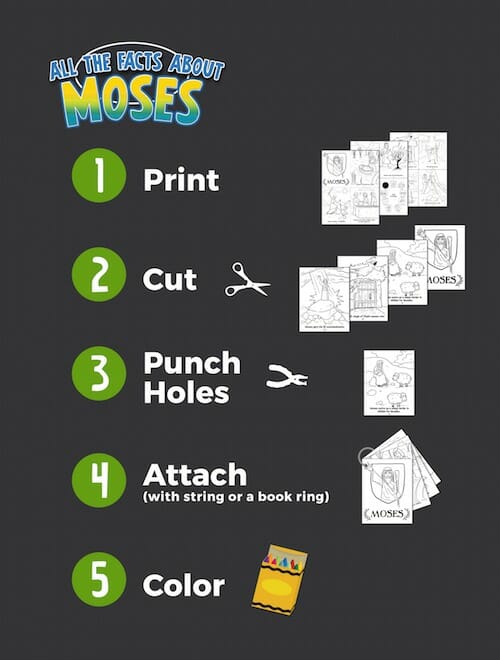 Help kids of all ages learn about Moses with our printable flip book!

Just print, color, cut, punch holes and then attach with a book ring or string.

With the digital file we provide, you are welcome to print out as many flip books as you need for you own family or church use. 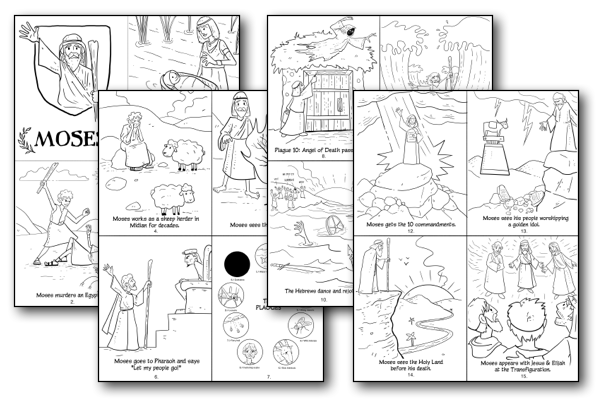 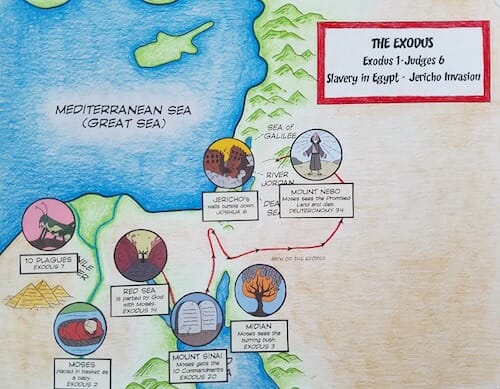 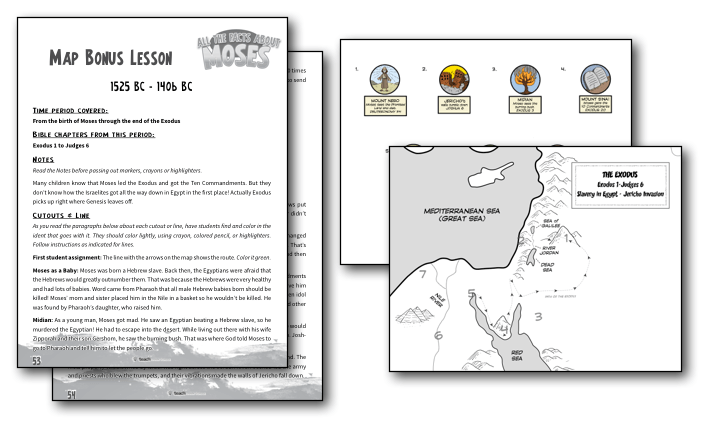 Kids get to cut out key landmarks and paste them on a map to help reinforce the big picture of Moses' life.

Print Out As Many Certificates,
Flip Books, & Maps as You Need!
Year-After-Year!

That’s right, we are so sure that you will love the  All the Facts About Moses Lesson Pack that we are offering an unconditional 100% money-back guarantee.

Patience & humility are rare traits to find in kids.

That’s because these are virtues that need to be taught, role modeled, and practiced.

By learning about Moses as a person (and not just a character that appears in different Bible stories), kids will start to understand and embody the character traits he championed.

Moses is the Bible Hero the kids of today need in their lives!

YES, I want in! I want access to the "All the Facts About Moses Lesson Pack". Please give me INSTANT access right now!